Visit to Fadin (Visita a Fadin): in the Theatrum mundi by Eugenio Montale (versione in lingua inglese)

Visit to Fadin (Visita a Fadin): in the Theatrum mundi  by  Eugenio  Montale

As I already observed, not a few seasons ago,in the second chapter of my  L’atelier di Montale, Rome, Editions of theUniversity, 1990 (pp 44-52), Visita a Fadin (  Visit to Fadin)comes to constitute a key moment in the performance of the work of Montale, a pivotal point from which depart some guidelines of both expressive and content order that carry into the heart of the so-called “the second Montale”, the poet of  Satura  and ofthe collections closedwith Altri versi. I have already pointed out, in those pages, as in the second prose of La bufera e altro the young Sergio Fadin, poet soon stolen from life by the incurable illness of first 900 and of which the  Elegies came out posthumously in ’43, as Montale himself lets us know in the Notes to the Mondadori editions ofthe Bufera,  is among the first characters fully outlined in the figure, in the face, in the features of a physiognomics that unveils, like a map, the otherwise hidden territories of an entire inner world, of a personality peremptorily connoted by ethical reasons indispensable to the eyes of the “visitor”. As well as its completeness is revealed in the few essential data that constitute his “space” of character placed in the scenario of the “balconate of the incurable”, where other “travel companions”, the workers the clerks the hairdressers, have passed as appeared in their “last stop of the journey”.

In this scenario, therefore, Montale also passed, experiencing a quick encounter, whose interview he does not remember “more than nothing”: he passed as a silent witness, a spectator. The initial, real and autobiographical data was the encounter between two persons, and of the two, Sergio becomes a character, the other person becomes a  narrative writer; it is in this function that the author conceives in allegorical terms, in his interpretation of a personal data and myth, the human story of Fadin inscribed in the universal story that everyone involves, as a scene of the Theatrum mundi. In this scene the interpreter gives voice to the person  Fadin, interprets him as a “theatrical” character, to give him back as a person, no longer mask, according to the Latin etymology, but a person who claims his incoercible presence in the “theatre of the world”: the  representation of Sergio Fadin becomes for Montale moral instance.

If existence is allegorically, according to a tradition that begins with Plato and passes through medieval moralities and then to the “great theatre of the world” of the sixteenth century, the part that each (Everyman, Jedermann)  assumes, death is therefore an “exit of the scene”: “Exit Fadin”, notes Montale, through the caption that closes the textual representation of the encounter. Fadin comes out to enter into a “different order” that is that of the poetic act which gives voice to the person, makes it present in the poetic weaving, from elusive that is in the plot of existence: the different order is that of the”book of your relics” that Montale can wait for without haste, for the first way in which Fadin relives is in the deep lesson of “daily decency”; but in the meantime it is on the page of the Montale’s prose that the young poet persists in a different order: if we accepts the Montale’s hermeneutic that takes the same artistic form as a metaphysical dimension, where one can carry out the attempt to know,  “although the reason for representation escapes us”. Certainly, in the years of composition of the Bufera e altro the poetic act of Montale is at the height of its confidence in a “divine” possibility of the word that encompasses symbolic-allegorical supersensitivity and guards them in its tensional state of transformation and transfiguration and metamorphosis of the natural data, of existential myths, of the messenger people of the divine, as is Clizia. A word that establishes the allegorical messenger-poetry-life circle. The Montale that will come after, the prosastic one, the satirical one, the diaristic one, will see this possibility fade and extinguish gradually; poetry will reverse all its allegorical potential; Montale’s allegoresis will build more and more in a vacuum; life, the pure vital fact, will ask only the sense of an  overlived,  key word of the last Montale. We are thus at the metabiology that replaces the metaphysics of the first great montalian moment. Poetry is prose because it tends to approach life, to its even minimal insignificance, to talking, to brooding about the Old, in reminiscing even the slightest gleams of the past.

The “talking” of the Old Montale is a muted discourse, a continuous uninterrupted  reasoning in the tip of lips of life, a murmur that is an attempted definition of a third  status,  for the current life, in place, is meaningless as well as every traditional metaphysics linked to the conception of “another life”, of an afterlife.

Let us return again to Visit to Fadin,  which the poet concludes by stating, with a form typical of many of his lyricists, that “Your word was not the one that is written”. For a poet not yet “Old” and in relation to intellectuals of liberal formation foreign to their congenital nature and formation to the culture of fascist imprint, the immediate post-war presented itself as a possibility of re-foundation of Italian society on the basis of a humanistic root common to the old Europe and well alien to the first signs of the future mass and post-industrial society. That judgment that closes the prose is an openness declared to life, when it is, as in Fadin, far from “recalling itself to the supreme questions, to the universals”, a life lived in a human way, “that is, simple and silent”, that is, in a way that can inverse the same poetic act, tighten in one the reasons of living and those of the poet. The character Fadin, therefore, is foreshadowing characters who will appear in the late and last Montale as extreme depositors of that truth, distant in time, certainly no more paradigmatic than an existential model realized in the moral fullness of the young Fadin, yet still figures of salvation, emerging from childhood, such as the “bearded woman”, a presence that is initially encountered in the prose of Farfalla di  Dinard,  or present in the house of senility, like Gina, or emerging from an era intermediate: real  dramatis personae,  of which we must not only detect the presence but also measure the mythopoietic consistency, while taking into account that the poetry of the “Old” gropes between the ever-lower darkness of memory and that of death, so it will be a matter of grasping more shadows than characters, more figures than people, more “adored my larvas!” and names and  flatus vocis that presences outlined in field take on a scenic iconography.

They are figures of a mental theater,   where gestures, acts, “occasional” faces also count. I would say, indeed, that precisely in this theater of mind and memory, in this appearing/disappearing of figures, shadows, images as projected by a magic lantern, Montale’s poetry offers its last aesthetic emotions, still creates small but resistant myths that manage to “pass” the page, to emerge out of a constellation of feelings and suggestions all too private, closed in themselves.

I believe that the reader, precisely because the Montale’s mental theater then offers its last non-empty allegory, that of a “Theatre of the World” where the great farce of nothingness or dis-aster is recited, where we are all participating even if we believe that we are only spectators, the reader can see that small crowd of characters who appear in the limelight as evoked for a hinged miracle:  people who come from life and make their last appearance thanks to the strenuous and residual trust of the poet in the possibility that poetry, although sliricized, prosaic, muted, makes the voice of the past resonate, transfiguring in presence what is absence.

In Visita a Fadin, shortly, the montalian reader, having now opened before him the whole arc of the poet’s work, having followed the changes of course, the reversals, the reversals of sign or face (the verse and the rectum as stated Montale himself to comment on the second phase of his poetic discourse) can identify the starting data of those that will be together the “theatre of the world” and the “mental theater” of   the second, of the “old” Montale. However, it is not a question of retracing the history of a poetic theme or motif from the first collections to Altri versi, his extreme proof, but of coming, particularly in the last Montale’s collection, to identify the completion of an allegory, the last, which becomes a key to reading, in my opinion, very fruitful. You know how much he plays, at the level of the imagination, the attendance that Montale had of musical theater, starting from his youthful passion for singing and the world of opera to end up his activity as a music critic for the “Corriere di informazione” in the years 1954-1967; not forgetting his work as a translator of dramatic texts, especially shakespearean ones, from  Hamlet  to The Comedy of Errors, The Timone of Athens  and  The tale of winter. It must also be borne in mind that in  Farfalla di Dinard  and Fuori di casa, (both proses), characters and environments come in some of their distinctive features of costume, appearances and tricks, from the artifact world, fantastic and conventional, in some ways “absurd” as the poet himself said, of lyrical and melodramatic theater.

For brief nods I suggest some observations that would then require a much broader sampling and evaluation. Montale, starting from Satura, gradually assumes the referent constituted by the theatrical world no longer or not only as a source of images, objects, tricks, real materials for an  imagerie that finds expression in the prose, but as a metaphorical archetype, for which the world and life are representation, a representation of nothingness, of emptiness, of disaster, of, precisely with theatrical term, catastrophe, but without a conquered form of catarsi. Even in Montale, as in Pirandello, the traditional concept of theatre is overturned as a metaphor for life, whereby life and the world are themselves a great and universal representation, in a farcical, grotesque or absurd form; the great theater of the Montale’s world, certainly also in consonance with the various Beckett, Ionesco, Adamov, is a “Theatrum mundi” all in a crisis key; crisis of a word that no longer means anything, emptied, stuttering; crisis of acts and gestures by soulless puppets, by mannequins, by puppets; crisis of the character-mask devoid of identity and who finds his own figuration, precisely, in the mask. Words, acts, gestures, figures, scenarios, live in the theater, as in a universe of fiction, and have nature of shadows, of simulacra: shadows of the shadows of the world, simulacra of simulacra, those of life, which the old Montale sees in a immemorial and precisely umbratile past and that definitively distances even those who were the “real living”; or that he sees, such simulacra, in the present of the phenomenal contingency, but that are actually the non-living of the time present at him. If the Whole is Nothing, the World is like a great Simulacro; and the world is like the Theatre, it is like a Representation, also populated by its own universe of characters, voices, objects, seen as mere semblances, as well as abstractions, but still capable, albeit negatively, of constitute minimal significant poetic truths. 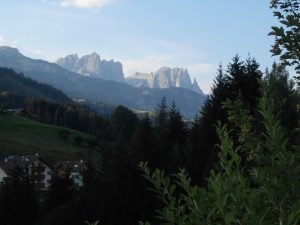 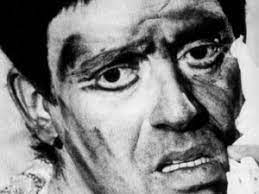