A hundred years have passed since that evening of May 9, 1921 when the company of Dario Niccodemi  plaied the most famous and for now still very lively comedy by Luigi Pirandello. I have already written about it in detail in my The page, the look, the action. Italian dramaturgical experiences of the ‘900, (Rome,  Bulzoni, 2019). I want here in a short, concise way, to summarize what literary and scenic value it can take for us today.

First of all, I maintain, together with other scholars and above all directors (Carlo Cecchi, Luca Ronconi), that the “aged” part of pirandellian text is the metatheatrical dimension, and that of theater in the theater, which for the current spectators no longer reserves the interest previously shown. How can we be involved in the conflict between the six characters, plus Madama Pace, and the company they find on stage, a place of congressman, while a rehearsal of another Pirandello text, is beginning? That company is the model that existed in the twenties of the twentieth century, that is, the Italian company of the great actor: but today that almost all theater is in the hands of the Stables Theaters and the artistic directors? And today that the actors themselves have different sensitivities, and working methods?

Certainly a function, to the later, in pirandellian comedy, remains and the actors of the real ensemble trigger the absolute desire, especially in the Father and stepdaughter, of acting themselves, as if they were true actors;  the Mother Scene happened in the back room of the brothel of the seamstress Madama Pace, with the risked incest, a more moralistic fault, than anything else, perhaps.

In fact there are some interpretative possibilities deliberately opened by the author, in writing a text apparently “chaotic”, which could also suggest a possible real incest, as well as the possibility that the Stepdaughter is instead the daughter of the Father’s character again “conjugated” with that of the Mother; and according to the words of the first Son of the couple, still other shames seem to be hidden and hidden from the characters, such as, for example, that the Little Girl, stepdaughter’s little sister, was drowned by the latter.

Surely both Cecchi (in a humorous-comic-realist key) and Ronconi, with post-modern sensibility, emphasize the almost total interest that the unfortunate family still exerts on metteurs-en-scenes and viewers.

In particular, Ronconi, who was together with Strehler and Visconti, among the first great Italian theatrical directors, he covered the text, in 2003, with young students who had just graduated actors, following a perspective indicated by the author himself that I would dare to call “mental”, and therefore virtual: everything is the result of Pirandello’s mental vision, the whole story of those characters is the work of his poetic fantasy, of his “observing” them from the outside in the theater desperately aimed at making their story and their lives of characters that the author did not want to trace.

These characters, according to Ronconi, only transpary from the work that his young actors have done to be precisely real and credible, and amazing actors of characters-projection of pirandellian fantasy.

This staging, visible in Rai display cases, can only be paradigmatic today, and open, together with the previous one curated by Carlo Cecchi, a reference for the next, I hope courageous, performances. 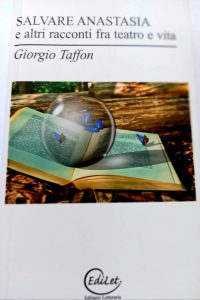